A man is stuck in the airport. He can’t get into the country and he isn’t allowed to leave. This goes on for days and weeks and months. But it isn’t the story of the fictional character played by Tom Hanks in the 2004 hit “The Terminal.” It’s the real-life tale of Roman Trofimov, an Estonian national who was forced amid international corona lockdowns to spend over 100 days at the Manila International Airport in the Philippines.

Trofimov, a 36-year-old software engineer, arrived at the airport in Manila on March 20. Only after The Times of Israel’s Hebrew sister site, Zman Yisrael, reached out to the Estonian Foreign Ministry was he put on a homebound flight on the evening of July 7 — 110 days later.

After traveling in Thailand in mid-March, Trofimov says he boarded a flight to Manila to continue his journeys, unaware that the capital city was in a government-ordered shutdown. At passport control he was denied entry to the Philippines and told that he must return to Thailand. But the carrier on which he’d come, Air Asia, informed him that the next departing flight was on April 15.

“I couldn’t figure out what was going on, I demanded answers from whoever I could talk to at the airport, but no one was willing to give me answers,” Trofimov told Zman Yisrael via text message. “They took my passport and sent me to Terminal 3. Without my passport I couldn’t so much as leave the building to get a breath of air. I had to sleep on the floor of the terminal and eat snacks and candies that I was able to buy from the vending machines, because most of the stores were already shut.”

Roman Trofimov’s makeshift bed on the Manila airport floor, on which he slept for a week. (Courtesy)

“Later on, I learned that I had the status of an ‘excluded passenger.’ They explained to me that according to Philippine immigration laws I could only return on the airline on which I’d come, and only to the destination from which I’d left [Thailand]. Without my passport, I could not leave on any other airline,” he said.

During that first week, while sleeping on the airport floor, Trofimov made contact with the Estonian Foreign Ministry, which tried to help him contest the decision to bar him from entering the country. The Philippine immigration authorities, however, refused his request twice on the grounds that he was a “public charge” — a person without the means to support himself on his own and therefore a burden on the host state.

The 37-square-foot room in the Manila departure terminal in which Roman Trofimov slept for three months. (Courtesy)

The Estonian authorities did manage to reach a deal with the airline, whereby Trofimov would be given a room in the airport and two meals per day. At that point he moved into a 3.5-square-meter (37-square-foot) room, which included a bed, a fan, and a shared bathroom and shower. This was not a room in one of the nearby airport hotels, but a space in the departure terminal that was converted into a domicile for him.

Only this week, after 110 days of captivity, did Trofimov realize that he had to rouse world public opinion if he wanted the situation to change.

“I was a vegetarian when I arrived here, but since then I’ve been forced to eat chicken with steamed rice. The quantity is insufficient, there’s no variety, and I don’t eat vegetables. All of the stores are closed and I can’t provide myself with a balanced diet. I feel unwell, have a disability, and my back hurts because of the way I was forced to live here,” he said.

No one to count on

Trofimov said neither his elderly mother nor any close friends were able to assist him.

“After making my story public on social media, I got a ton of advice — most of which I have no way of implementing,” he said Tuesday, while still in limbo. “My budget is small, the phone and the internet are very slow. I’ve been looking for information and for contacts, and I know there’s no one to count on to get me out of the situation. Most of the day I’m busy just with survival.”

Trofimov said he spent a lot of time sleeping because he felt weak and depressed. He said he preferred to remain in his room because since flights were renewed the airport has grown crowded again, and he is afraid of catching the coronavirus.

“I feel like I’ve been put in jail for no reason, because I committed no crime. But the airline takes no responsibility and in their official responses they actually blame me for what happened,” he said. “Most of the airline’s staff isn’t working because of the disease, and the people that are working talk to me like robots, like they have no human feelings.”

Asked for a response, the Estonian Foreign Ministry replied immediately. The Estonian consul in the Philippines is in constant contact with Trofimov, it said, and has been making efforts to improve his living conditions. Trofimov, the ministry said, arrived in the Philippines during the coronavirus lockdown and therefore assumed the risk of being stuck at the border. Moreover, he refused the ministry’s offer to accept a loan from the government in order to buy a ticket back to Estonia. 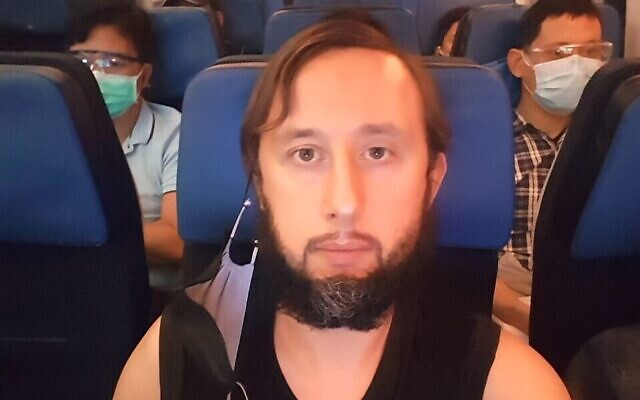 Roman Trofimov on a flight home to Estonia after 110 days living in an airport terminal in Manila, Philippines, July 7, 2020. (Courtesy)

Nonetheless, said the ministry, the government was committed to getting him home within the coming days.

Several hours after this conversation, late Tuesday night, Trofimov sent an update: he Estonian Foreign Ministry had put him on a flight home. The three-and-a-half month nightmare had come to an end.

A Hebrew version of this story first appeared on Zman Yisrael, The Times of Israel’s Hebrew-language sister site.

Adin Steinsaltz, at The Blogs

Amanah: Choice of PM candidate must be decided by Pakatan presidential...

Activity at Pyongyang’s May Day Stadium hints at August start for...

US welcomes WHO investigation into origin of pandemic

US woman freed after year as hostage in Nigeria

Poll shows split — between Albertans and Canadians, CFL fans and...