Germany on Friday joined the Czech Republic in offering to speak out on Israel’s behalf at the International Criminal Court, which is currently weighing whether to open an investigation into possible war crimes committed in Gaza and the West Bank.

Both Berlin and Prague submitted requests to become an amicus curiae — a “friend of the court” who is not a party to the case but wants to offer its views. The deadline for states to submit legal opinions expires Friday.

Both countries are expected to submit written legal opinion positing that The Hague does not have jurisdiction to investigate the Israeli-Palestinian conflict.

Austria, which in recent years has become closer to the Jewish state, is also expected to file an application.

Other states, including Australia, Canada and Hungary, have taken Israel’s side in the debate over jurisdiction, but have not asked to submit written legal opinions to the court.

The Israeli Foreign Ministry on Friday declined to comment on the matter.

“It is really great that many countries are agreeing with our principled position,” a senior legal official told The Times of Israel on Friday. He noted that Attorney General Avichai Mandelblit and the Foreign Ministry have published lengthy statements and explanations as to why they think the ICC does not have jurisdiction to launch an investigation.

On December 20, the ICC’s chief prosecutor, Fatou Bensouda, said she had concluded her half-decade long preliminary examination of the “situation in Palestine” and has “reasonable basis to believe that war crimes were committed” by both the Israel Defense Forces and Hamas and other “Palestinian armed groups.”

At the same time, she acknowledged that The Hague may not have the jurisdiction to deal with Israel/Palestine. Hence she asked for a ruling by three ICC judges to determine the scope of the court’s territorial jurisdiction. 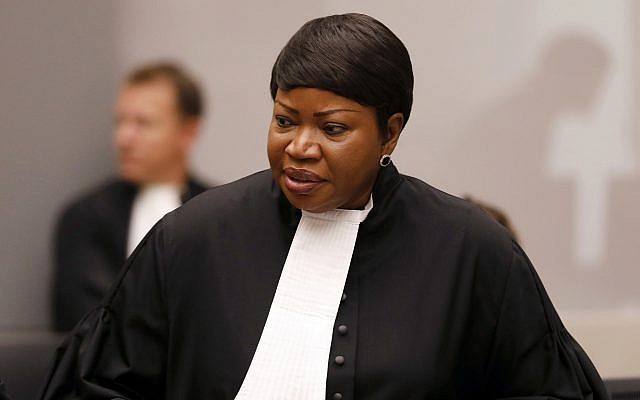 Prosecutor Fatou Bensouda in the courtroom of the International Criminal Court (ICC) during the closing statements of the trial of Bosco Ntaganda, a Congo militia leader, in The Hague, Netherlands, August 28, 2018. (Bas Czerwinski/Pool via AP)

The prosecutor herself believes “Palestine,” which acceded to the Rome Statute, the court’s foundational document, in early 2015, is enough of a state for the purposes of transferring criminal jurisdiction over its territory to the court.

It is now up a so-called pre-trial chamber to rule on the matter. The three judges of this chamber — Péter Kovács, of Hungary, Marc Perrin de Brichambaut, of France, and Reine Adélaïde Sophie Alapini-Gansou, of Benin — invited “Palestine, Israel, and victims in the Situation in the State of Palestine, to submit written observations” on the matter by March 16.

Other states, as well as private groups or organizations could apply for amicus curiae status by Friday. If accepted, they can file their observations on the question of jurisdiction by March 16.

In its application, signed by hand by Foreign Minister Petricek, Prague reiterated that it “fully respects and trusts the independence” of the ICC and its “impartial” decision-making process.

The issue of the court’s jurisdiction and the question of Palestinian statehood needs to be analyzed “in accordance with general international law,” the Czech application reads. It goes on to cite 1933 Montevideo Convention on the Rights and Duties of States, which has traditionally been recognized as the benchmark to determine what constitutes a state under international law.

According to the convention’s first article, a state needs to possess the following qualifications: a permanent population; a defined territory and government; and the capacity to enter into relations with the other states.

“It has been a long-standing position of the Czech Republic that Palestine has not fulfilled yet all criteria of statehood under international law,” the application states.

While Prague supports the Palestinians’ aspiration for independence, the fact that Palestine cannot be considered a state raises “doubts” regarding the ICC’s jurisdiction over the West Bank and Gaza, the document concludes.

Labor claims he and Gantz will form minority gov’t backed by Liberman, Arabs

Countdown to fourth elections: 7 things to know for February 28

In final days of campaign, Netanyahu launches effort to reach out to Arab voters

The Fiji Times » Turkey says it will let refugees into...